Want to get the DealBook newsletter in your inbox each day? Sign up here.

Six of the 10 largest executive pay packages of all time were awarded last year. This and other findings come from a new survey of the 200 highest paid C.E.O.s at public companies conducted for The Times by Equilar, a consulting firm. “Even in a gilded age for executive pay, 2020 was a blowout year,” writes The Times’s Peter Eavis.

The spike is due in large part to linking C.E.O.s’ pay to stock prices. This “pay-for-performance” structure is intended to align managers’ incentives with those of the company’s owners, the shareholders. But it also raises questions about how much credit executives deserve for rising stock prices, and whether the performance conditions attached to stock awards are suitably tough. C.E.O. pay jumped 14.1 percent last year, while the median worker got a 1.9 percent raise. 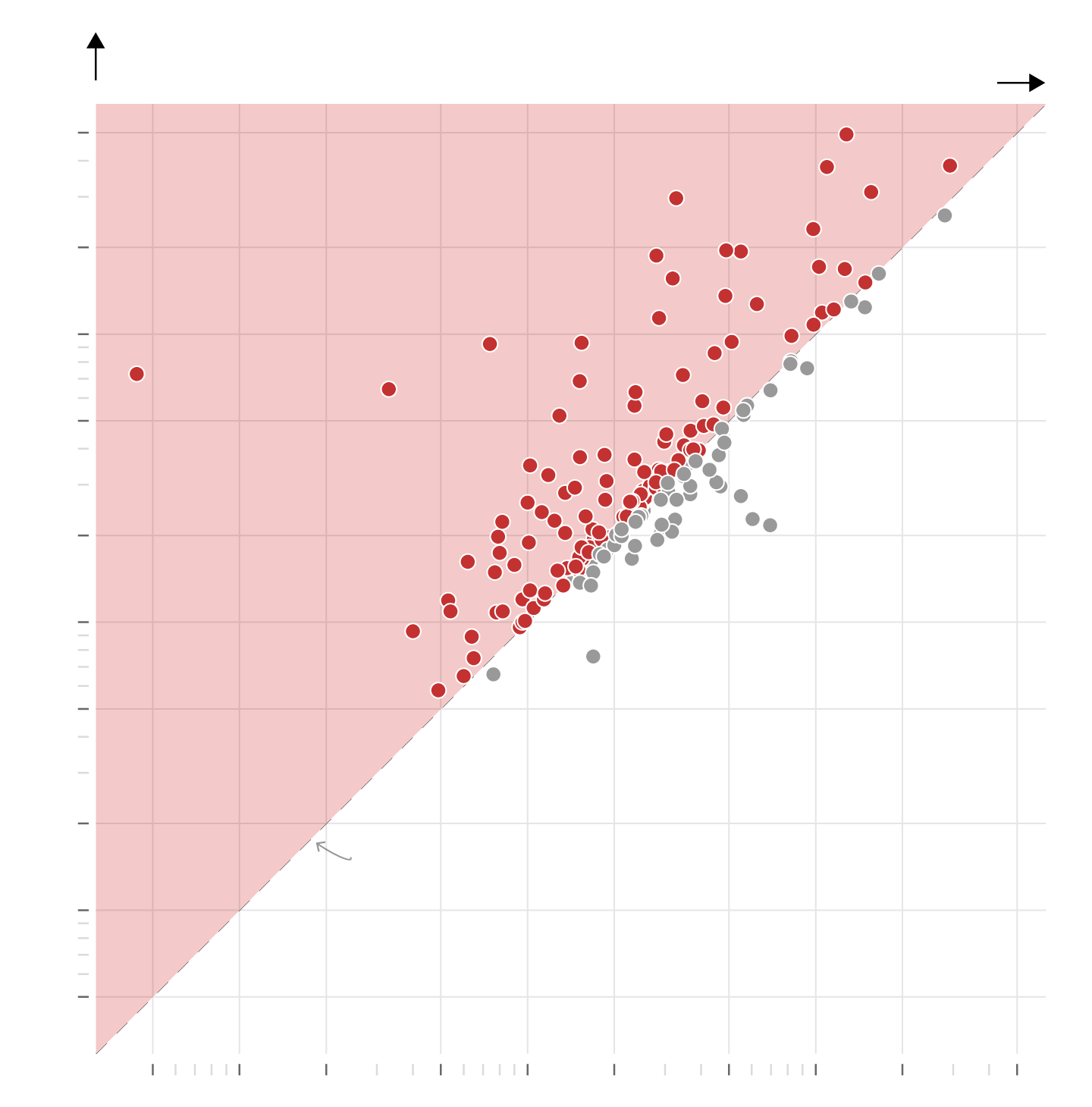 68% of companies with the largest pay

packages had wider gaps between 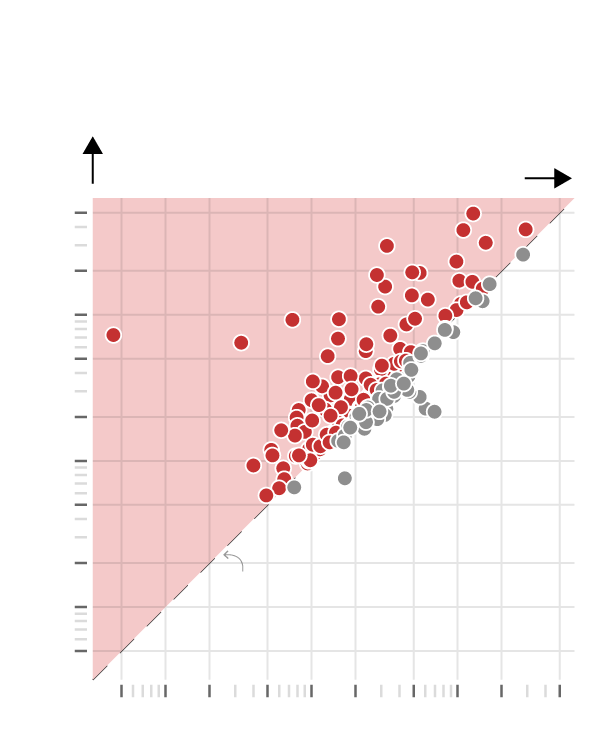 68% of companies with the largest pay packages

had wider gaps between executive and

employee pay after the pandemic.

Source: Equilar·Note: Only 183 of the 200 companies reported pay ratios both years. Scales are logarithmic.·By Jason Kao

“Say on pay” votes give shareholders a way to weigh in on compensation. Only around 2 percent of these nonbinding votes have historically gone against management, with recent high-profile rebukes coming at Starbucks and G.E. So far this year, votes against pay packages are on the rise, although these still tend to come in well below 50 percent disapproval.

Eight C.E.O.s received pay packages last year worth more than $100 million. In 2019, only one chief executive’s pay package crossed that threshold. The top three earners all oversaw companies that went public last year. They are:

For more charts and details about executive pay packages, read the full article.

A bipartisan group of senators announced a compromise infrastructure deal. Five Democrats and five Republicans put together a package worth $1.2 trillion over eight years. It would address a narrower range of physical infrastructure than the plan proposed by the White House, and avoid raising taxes to pay for it (though details on this point are scarce).

The F.D.A. extends the shelf life of J.&J.’s vaccine. The regulator gave the company six more weeks to use up its supply, before millions of doses were set to possibly go to waste. State officials said the federal decision to pause its use in April on concerns about rare blood clots led to sagging demand for the single-dose vaccine.

Investors shrug off high inflation numbers. Consumer prices rose at their fastest pace since 2008, more than economists expected. But one-third of the increase in the latest data, for May, was due to a surge in prices for used cars, a sign that the spike in inflation may be a result of supply chain bottlenecks and other temporary factors. The S&P 500 closed at a record high and bonds showed few signs of distress. Stock futures are up again today.

The F.B.I. urges companies not to pay ransoms to hackers. Christopher Wray, the F.B.I.’s director, said at a congressional hearing that companies infected with ransomware should quickly contact law enforcement to find other ways to respond. Victims paid nearly $350 million in ransoms last year, emboldening hackers to take on more high-profile targets this year, like the meat producer JBS and the Colonial Pipeline operator.

Regulators weigh the risk of banks holding Bitcoin. In both good and bad news for supporters of cryptocurrency, the Basel Committee on Banking Supervision proposed a risk-management framework for crypto assets on bank balance sheets. That establishes digital tokens as a recognized asset class, bringing them more into the mainstream, but the suggested risk weight, 1,250 percent, would make capital requirements for holding crypto onerous.

The Chinese ride-hailing giant Didi Chuxing published its I.P.O. documents yesterday, giving the first peek inside a company valued at $56 billion a few years ago. The planned New York listing could be the world’s biggest I.P.O. this year, with sources telling Reuters that the company may raise $10 billion at a valuation of $100 billion. The offering comes as many city dwellers emerge from pandemic lockdowns and return to their ride-hailing ways.

Sales and profit fell last year. Didi’s revenue fell 8 percent last year, to $21.6 billion, as passenger numbers slid during the pandemic. It lost $1.6 billion for the year, and like most ride-hailing companies, Didi has historically been unprofitable even during better economic times. It reported a profit of $30 million in the first quarter of this year, although some of that came from gains on spinoffs and divestitures.

It wants to grow globally. Didi operates in 15 countries, including Brazil and Mexico, and has built a dominant position in China, where it bought Uber’s operations after a few years of competing with it. “What we have learned and built is relevant across the globe — in Latin America, Russia, South Africa or anywhere where affordable, safe and convenient mobility is valuable,” Didi wrote in its prospectus.

— Michelle Lewis of Orange County, Calif., on her honeymoon aboard the first cruise ship to set sail from a North American port since the pandemic began.

Though it was billed as the continent’s first fully vaccinated cruise, two passengers on the Royal Caribbean ship nonetheless tested positive for the coronavirus yesterday. They are asymptomatic and in isolation, with the seven-day cruise set to return to St. Maarten tomorrow. Cruise lines are preparing to restart operations from U.S. ports this summer.

Dealing with the fallout from a deadly, destabilizing pandemic left many executives struggling for words. When they tried to describe the challenge to investors, especially during the early days of the outbreak, they often turned to the same descriptor: “unprecedented.”

As economies reopen and conditions become more, well, precedented, the chatter among executives, analysts and investors is changing as well. Mentions of “unprecedented” events are less prevalent than they were a year ago and are often references to something in the past. “We’re now comparing to the unprecedented growth we saw a year ago,” said Jim Jaye of Sherwin-Williams at an investor event this week.

Best of the rest

We’d like your feedback! Please email thoughts and suggestions to [email protected].

French Open 2021: Djokovic vs. Nadal in the Men’s Semifinal

This swarm of robots gets smarter the more it works

Boris Johnson described his health secretary as 'hopeless,' according to former aide

After meeting, Biden and Putin say the talks went well, but divisions remain.

The scandal over Trump's leak investigations keeps getting worse