Home   Travel   What the 'golden age' of flying was really like
Editor's Note — Monthly Ticket is a CNN Travel series that spotlights some of the most fascinating topics in the travel world. In August, we're going back in time to revisit some of the greatest retro travel experiences.

(CNN) — Cocktail lounges, five course meals, caviar served from ice sculptures and an endless flow of champagne: life on board airplanes was quite different during the "golden age of travel," the period from the 1950s to the 1970s that is fondly remembered for its glamor and luxury.

It coincided with the dawn of the jet age, ushered in by aircraft like the de Havilland Comet, the Boeing 707 and the Douglas DC-8, which were used in the 1950s for the first scheduled transatlantic services, before the introduction of the Queen of the Skies, the Boeing 747, in 1970. So what was it actually like to be there?

"Air travel at that time was something special," says Graham M. Simons, an aviation historian and author. "It was luxurious. It was smooth. It was fast.

"People dressed up because of it. The staff was literally wearing haute couture uniforms. And there was much more space: seat pitch -- that's the distance between the seats on the aircraft -- was probably 36 to 40 inches. Now it's down to 28, as they cram more and more people on board." 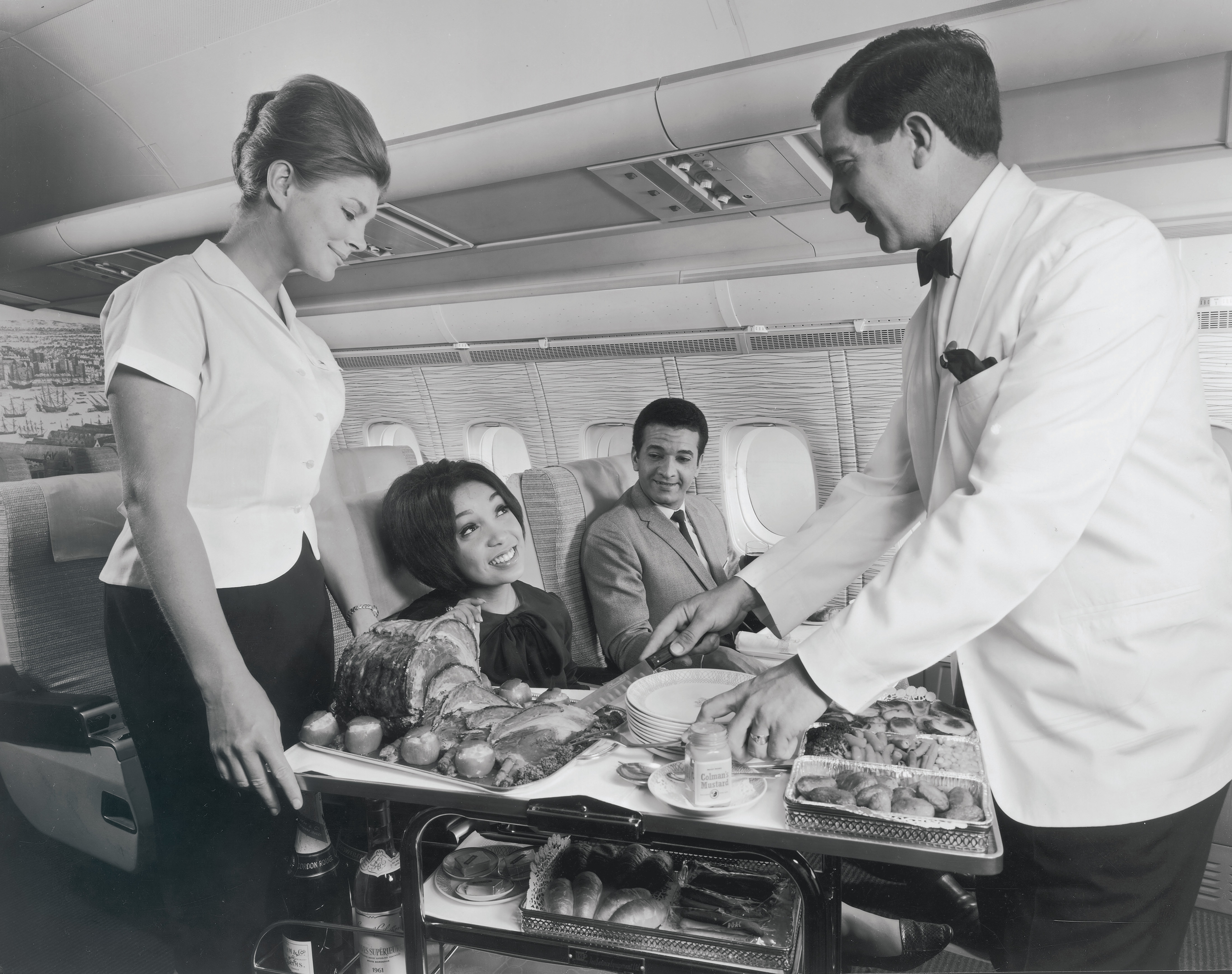 Sunday roast is carved for passengers in first class on a BOAC VC10 in 1964.

With passenger numbers just a fraction of what they are today and fares too expensive for anyone but the wealthy, airlines weren't worried about installing more seats, but more amenities.

"The airlines were marketing their flights as luxurious means of transport, because in the early 1950s they were up against the cruise liners," adds Simons.

"So there were lounge areas, and the possibility of four, five, even six course meals. Olympic Airways had gold-plated cutlery in the first class cabins.

"Some of the American airlines had fashion shows down the aisle, to help the passengers pass the time. At one stage, there was talk of putting baby grand pianos on the aircraft to provide entertainment."

Being a flight attendant -- or a stewardess, as they were called until the 1970s -- was a dream job.

"Flight crews looked like rock stars when they walked through the terminal, carrying their bags, almost in slow motion," says designer and author of the book "Airline: Style at 30,000 Feet, Keith Lovegrove."They were very stylish, and everybody was either handsome or beautiful."

Confessions of a 1980s flight attendant 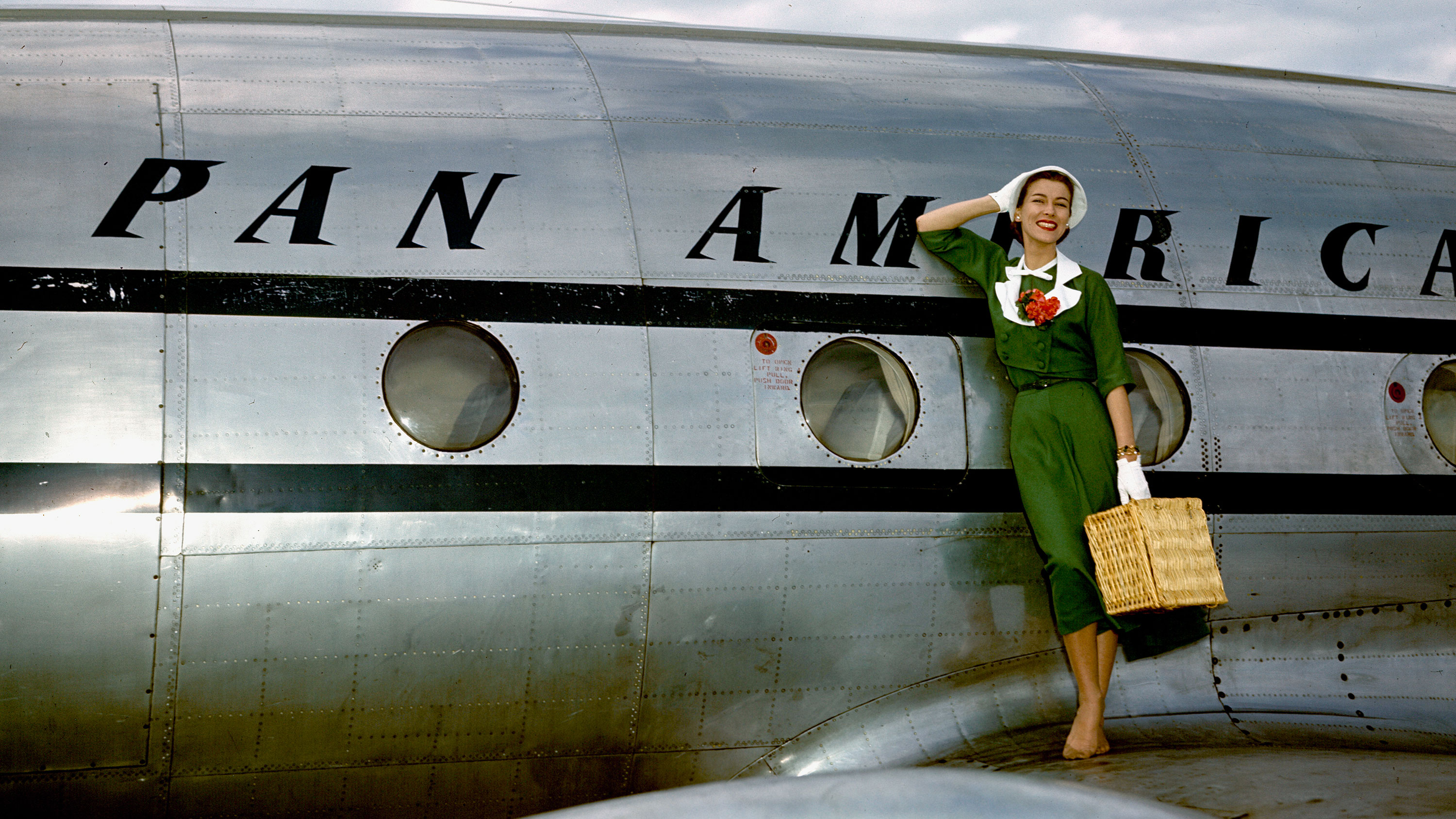 Pan American World Airways is perhaps the airline most closely linked with the 'Golden age'.

"It was like going to a cocktail party. We had a shirt and tie and a jacket, which sounds ridiculous now, but was expected then," adds Lovegrove, who began flying in the 1960s as a child with his family, often getting first class seats as his father worked in the airline industry.

"When we flew on the jumbo jet, the first thing my brother and I would do was go up the spiral staircase to the top deck, and sit in the cocktail lounge."

"This is the generation where you'd smoke cigarettes on board and you'd have free alcohol.

"I don't want to put anyone in trouble, but at a young age we were served a schooner of sherry before our supper, then champagne and then maybe a digestive afterwards, all below drinking age.

"There was an incredible sense of freedom, despite the fact that you were stuck in this fuselage for a few hours."

According to Lovegrove, this relaxed attitude also extended to security.

"There was very little of it," he says. "We once flew out to the Middle East from the UK with a budgerigar, a pet bird, which my mother took on board in a shoebox as hand luggage.

"She punched two holes in the top, so the little bird could breathe. When we were brought our three-course meal, she took the lettuce garnish off the prawn cocktail and laid it over the holes. The bird sucked it in. Security-wise, I don't think you could get away with that today."

Cognac and cigars: The golden age of inflight meals 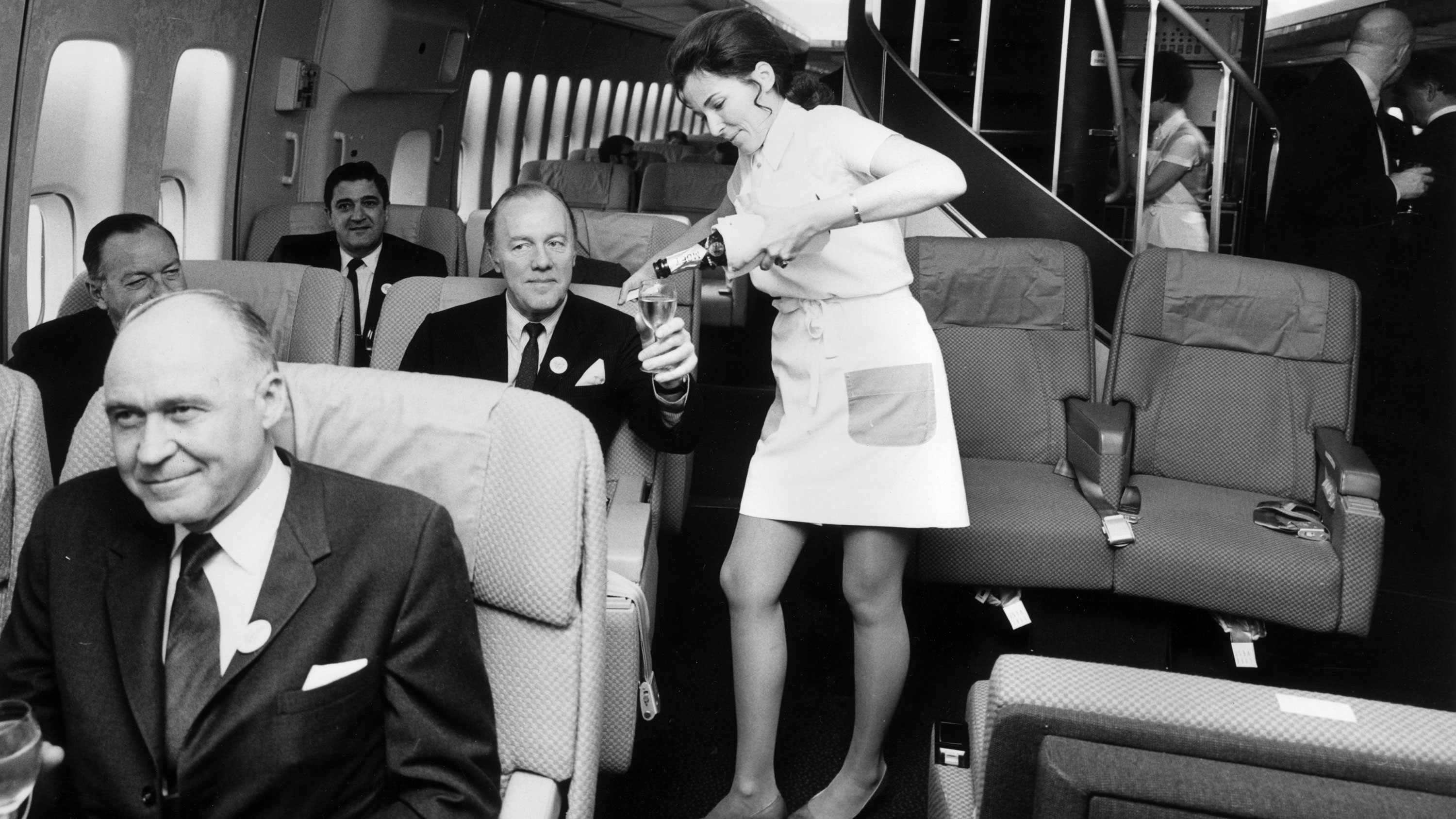 A Pan Am flight attendant serves champagne in the first class cabin of a Boeing 747 jet.

The airline most often associated with the golden age of travel is Pan Am, the first operator of the Boeing 707 and 747 and the industry leader on transoceanic routes at the time.

"My job with Pan Am was an adventure from the very day I started," says Joan Policastro, a former flight attendant who worked with the airline from 1968 until its dissolution in 1991.

"There was no comparison between flying for Pan Am and any other airline. They all looked up to it.

"The food was spectacular and service was impeccable. We had ice swans in first class that we'd serve the caviar from, and Maxim's of Paris [a renowned French restaurant] catered our food.

Policastro recalls how passengers would come to a lounge in front of first class "to sit and chat" after the meal service.

"A lot of times, that's where we sat too, chatting with our passengers. Today, passengers don't even pay attention to who's on the airplane, but back then, it was a much more social and polite experience," says Policastro, who worked as a flight attendant with Delta before retiring in 2019.

Suzy Smith, who was also a flight attendant with Pan Am starting in 1967, also remembers sharing moments with passengers in the lounge, including celebrities like actors Vincent Price and Raquel Welch, anchorman Walter Cronkite and the Princess Grace of Monaco. 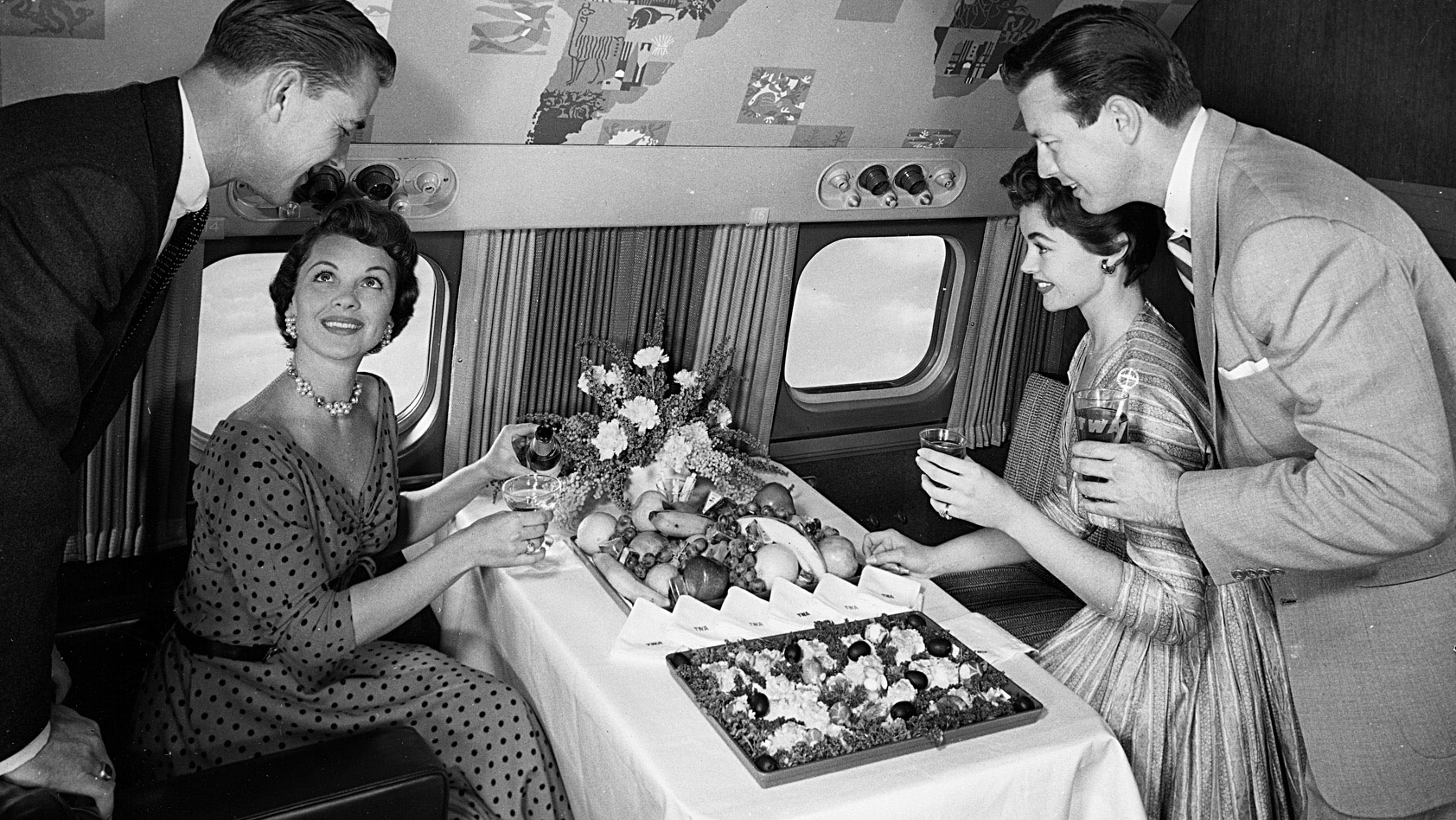 Travelers are served a buffet on board a Lockheed Super Constellation while flying with former American airline Trans World Airlines (TWA) in 1955.

The upstairs lounge on the Boeing 747 was eventually replaced by a dining room.

"We set the tables with tablecloths. It was quite fabulous," says Smith. "People could not sit up there for takeoff and landing, but went up to have dinner. After a while, they did away with the dining room too, and they put first class seats up there."

The first class service was worthy of a restaurant.

"We started with canapés, then we came out with a cart with appetizers, which included beluga caviar and foie gras," she explains. "After that we had a cart with a large salad bowl and we mixed it ourselves before serving it.

"Then there always was some kind of roast, like a chateaubriand or rack of lamb or roast beef, and it came on the plane raw and we cooked it in the galley.

"We took it out on another cart and we carved it in the aisle. But in addition to that we had at least five other entrees, a cheese and fruit cart, and a dessert cart. And we served Crystal or Dom Perignon champagne."

Things weren't too bad in economy either.

"Food came on the plane in aluminum pans and we would cook it and dish it all up," Smith says. "The trays were large and came with real glasses.

"If we had a breakfast flight, they would board raw eggs and we would have to break them into a silver terrine and whip them up, melt the butter, and cook them up with the sausage or whatever else we were having."

On top of dressing to the nines, passengers also didn't have much carry-on luggage.

"When I first started, there was no such thing as wheels on a suitcase," adds Smith. "We always checked them in, and then we carried a tote bag on board.

"There were no overhead bins either. The only things you could put up there were coats and hats. People only brought on one piece of luggage, that would fit under the seat."

It wasn't all perfect. Smoking was permitted on board, filling up the cabins much to the dismay of flight attendants; it was progressively banned starting in the 1980s. 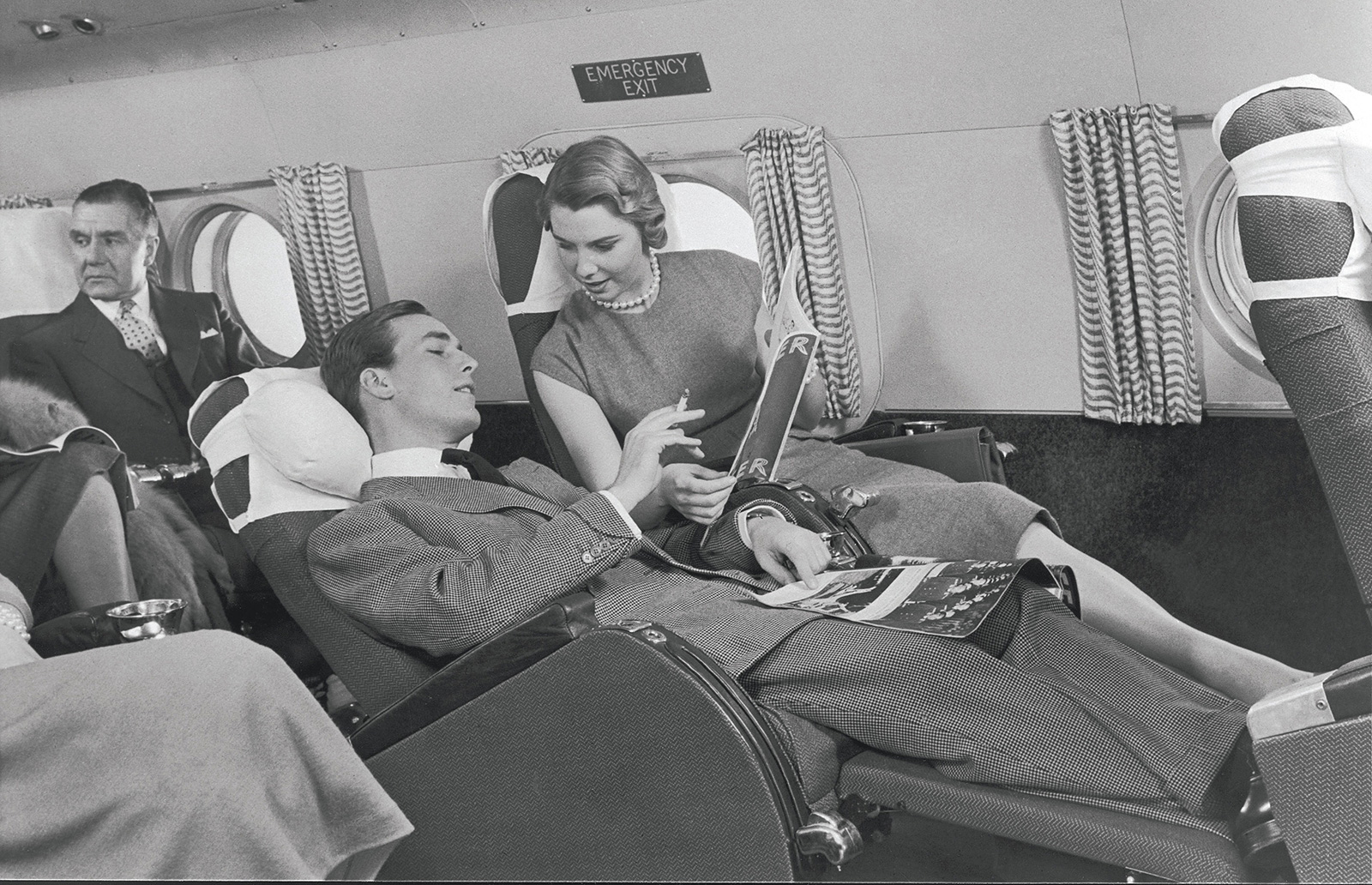 A first-class 'Slumberette' on a Lockheed Constellation, in the early 1950s.

Many airlines had strict physical requirements for hiring flight attendants, who had to maintain a slim figure or risk getting fired.

Hijackings were common: there were over 50 in 1969 alone. Fares were also much higher. According to Simons, a transatlantic flight ticket in the early 1960s would cost around $600, which is about $5,800 in today's money.

Nevertheless, nostalgia for the period abounds, and Pan Am in particular is still remembered fondly as the pinnacle of the air travel experience.

The airline folded in 1991, when the golden age was long dead after deregulation had paved the way for a less glamorous, but more accessible commercial aviation starting in the 1980s.

It survives through organizations that unite ex employees of the company, such as World Wings, a philanthropic association of former Pan Am flight attendants, which both Smith and Policastro belong to.

"Pan Am was a big cut above the rest. We always had very classy uniforms. They did not try to present us as sexual objects. And the work was pretty hard, but we were treated like royalty," says Smith.

"We had a wonderful time on every layover. We had so many adventures."

Doug Mastriano, Trump ally and candidate for governor in Pennsylvania, to appear before January 6 committee Tuesday

50 killed and many displaced in northern Nigeria flooding